Build projects, things that guys have come up with to make a Pinz better (or worse?) and aftermarket add-ons.
Post Reply
7 posts • Page 1 of 1

When you're camping in the desert in the summer, buying ice every day or two gets a little tiresome. I've been looking for good deals on a nice ARB 12/24V fridge but there don't seem to be any used ones ... ever. A new one is at least $500 which I think is outrageous for something smaller than a dorm fridge. Dorm fridges are cheap: i picked one up from my neighbor for $10 that looks like it had never been taken out of the box. However, the side-door would be a problem when bouncing over backroads and taking corners.

Turns out it is really easy to convert one into a chest fridge. Just take the 4 bolts out of the compressor frame and twist the whole assembly 90 degrees, where it can be bolted onto the adjacent frame. That's it. Nothing else to it. 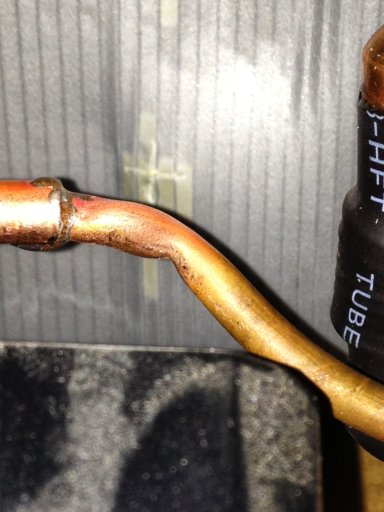 I had to take extreme care not to kink the copper tube because it was already kinked when I got it. As I twisted the compressor, I made sure a different part of the hose bent instead of the kink and it seems to have worked out alright. 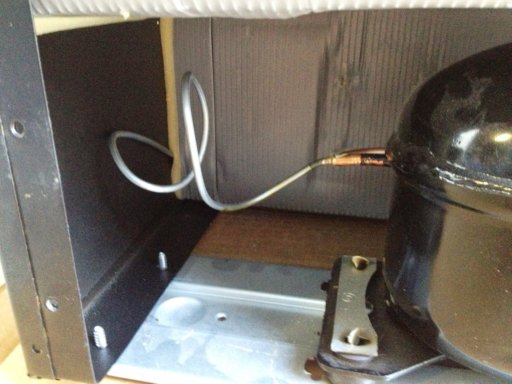 Left side of compressor. You can see the previous holes where it was mounted to the frame on the left. 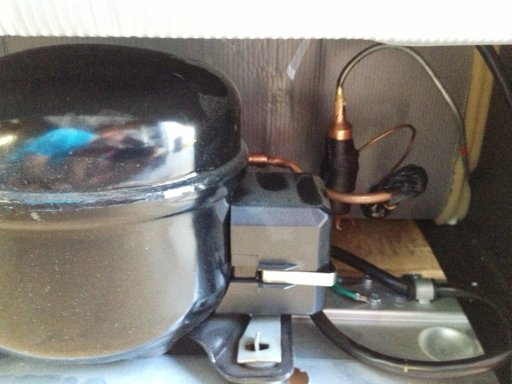 Right side of compressor. 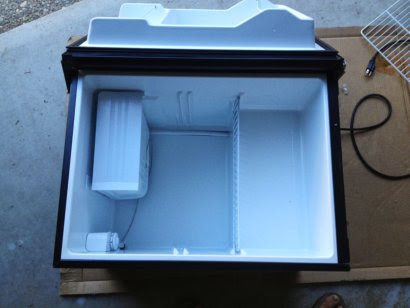 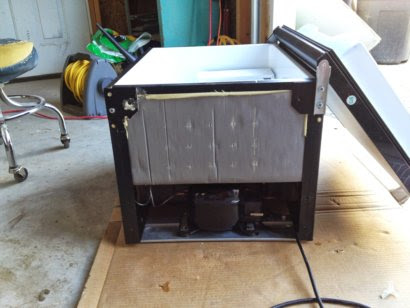 The compressor does get extremely hot, especially when I let it run in the sun for a few hours. After a field test, I might enclose the compressor with some sheet metal and install a fan and vent to keep it cooler.

And for the power:
I ran it through a small cheap inverter (1500W peak) and measured 6 amp DC with about a 12 amp peak on startup. When the temperature switch turn off there is of course no power consumed. So with my two deep cycle I think I have 100 amp hours, this thing can run continuously (worst-case compressor on all the time) for 16 hours without a charge!

Next is a 240W solar panel with a SunSaver charge controller ($300 total). I found a very cheap dealer of solar panels in CO if anyone is interested.
Matt

we use the Norcold/Engel fridges in AZ. They come up on Craigslist from time to time. Yes they are $400-$450 range but worth every penny. The units we look for are the 60qt models. the compressors are far more energy efficient (max draw at 3amps) then a regular fridge and are designed to be bounced around (which we do a lot of). These units also run on 12v, 24v or 120v so lots of options. I always suggest a 24v outlet next to the fridge in the event something goes wrong with the 12v supply. The addition of a solar system from Harbor freight and a battery and you are all set up for unlimited time in the desert heat (food and beer supply pending). Mark has been running this setup around 3 years now and I have had mine for a little over 2 years. Never unplug the fridge and always keep it stocked with my favorite beverage. best thing is you can go shopping for the groceries days in advance of a trip and just put them in the truck. If you have kids you know the advantage of not placing food in the house fridge that you are setting aside for a trip

Ah yes, the bouncing might eventually present a problem for oil in the compressor. If it only lasts a year or less I'll probably spring for a real 12/24V unit.
Matt

Hmmm, I have a GE mini fridge just like that. I hardly ever use it, so I just may have to see if I can get it to work in my Pinz. I only have a 375w inverter, but the data plate on the fridge says it only draws 0.8 amps on 120 volts. I'm anxious to give it a try. Thanks for the idea Mr. Toothpaste!
Mike

Hate to burst your bubble however if you end up using this setup for very long I suspect you will spend a lot on batteries. Remember to carry jumper cables and travel with other 24 volt vehicles. The reason for the high cost of the Norcold, Engel, and ARB refrigerator / freezers is their extreme efficiency. Some of the newer models also have low voltage shutoff and temperature alarms. My preference is the 45 liter model, its big enough for my needs and very low power draw, you can also get the TwoZone kit if you need more capacity. http://www.expeditionportal.com/equipme ... /Research/

Hey Mike, mine draws 80 Watts at the battery. So that includes the efficiency loss in the inverter, too. Your inverter will work fine. If you're going to convert the fridge, just be REALLY careful with that copper tube on the compressor.

Edzz, my rig came with a separate battery system for accessories like this. They actually helped me out of a bad situation once already when my engine batteries died, and I just swapped them out. My fridge is bigger than the 60qt, so it probably does use more power (60qt = 2.0 ft^3). And it probably doesn't have as good of insulation. But I have the battery capacity already to run it for 16 hours (worst-case with the door open or something) and it was $10. And it doesn't use THAT much more power: not so much as to ruin batteries. As long as I don't discharge it more than 50%, the lifetime isn't degraded.

My inverter and charge controller both have low-voltage load cut-off.
Matt