Well, I finally have the time to get my Haflinger back together - I am currently doing a complete rebuild of the brakes - all new everything except the drums themselves. Already completed a full rebuild of the steering (including a new steering box from Haflingertechnik).

I have the 19mm early VW beetle master cylinder installed and all new brake hoses and steel lines going in. All good there. I am going to put the larger sized brake cylinders from the front in the rear as well - so it will be 22mm diameter both front and rear.

I was talking with a friend who is a VW bus guy and he mentioned that later VW busses had a brake regulator device for the rear brakes which uses an internal steel ball to sense hard braking and then directs the fluid through a spring loaded regulator. It also apparently reduces braking on the rear wheels when going downhill as well. Sounds interesting - especially with the larger rear cylinders being installed. Its sort of a mechanical version of an rear ABS system... 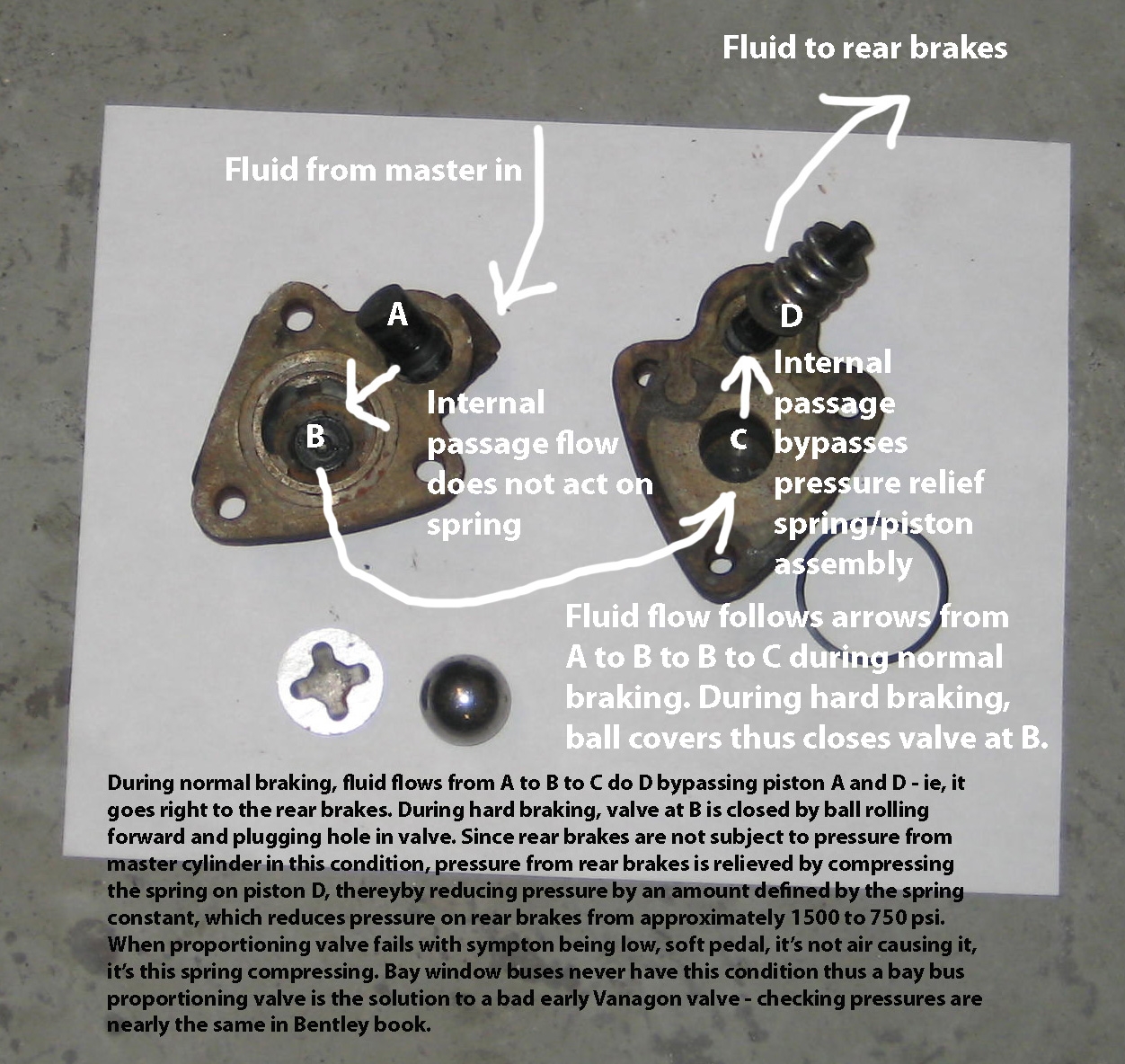 This one is a "quality reproduction" which, from my experience with VW parts, can mean anything from junk to good... Apparently there is a early version (71-78) and a later version (79-92) and the early ones are suppose to be better...

There is a Canadian place which rebuilds and tests the early ones - https://www.germansupply.com/home/custo ... at=&page=1
But they are expensive - about $250 USD with the core charge.

So - I might put one of these in on my haffy - Hopefully my friend can dig one up from his stash of parts.

Any thoughts or experience with this device? I only had the earlier split window busses myself and most of them had such poor brakes locking up the rears was not a concern...
Haf-e

The unit you are referencing is a brake pressure proportioning valve. Basically 60 to 80% of the vehicles braking force is provided by the front brakes, so if you hit the brakes hard in any vehicle which doesn't have a sophisticated braking system. Then you will notice that the front of the vehicle dips and the rear end lifts under the braking force.
So if you have equal braking force to all the wheels, the back end of the vehicle will go light and the wheel losing grip will lock. This generally results in the back end breaking away and trying to overtake the front end! So you end up in a "fish tail" slide.
The brake proportioning unit attempts to limit the pressure going to the rear wheels so that they do not lock up during heavy braking.

I have the same 22mm brake cylinders front and rear fitted to Lurch and have on occasion done the above.

Fitting one I think would be a good idea, but it is never going to be as good as a human reading the road ahead and just using the almighty engine and transmission braking that is available in a Haflinger!

One of these is fitted as standard in my Smart car which has disc brakes up front and drum brakes on the rear, so requires some way of evening out the braking force applied to the wheels by their respective brakes.

Yes - I have a similar valve on my Sprinter cargo van - but it is connected to the suspension to reduce braking when unloaded.

Does the smart car brake valve use the steel ball setup? I thought that was a interesting idea.
Haf-e

I looked it up and yes the smart car has a similar setup with the steel ball.

I think it would be a good addition to a Haflinger since the wheel base is so short - similar to a smart car.

The benefit of using the VW part is it is easily available (sort-of) and uses the same M10x1.0 bubble flare type brake lines. It also would be easy to bypass with a short coupler hose for testing with and without it in place.
Haf-e

Lurch does not have one and if I stand on the brakes hard, the rear wheels if travelling relatively slowly can be made to come off the ground! If travelling at speed, you can lock them up and produce a "fish tail" skid as usually the brakes are not absolutely even on the braking.
The sprinters version does the same thing in that it reduces the braking on the rear wheels if the vehicle is lightly loaded, and as it get closer to being horizontal with increasing load, more braking can be applied to the rear wheel without locking them up.

It would actually be a useful change to the Haflingers braking system to A) have a dual circuit system with one rear and one front brake linked (with brake compensator in each line) and B) to put a remote brake booster in the system.

I am looking at putting a remote brake booster (Classic mini one is about as small as you can get), in just to reduce the amount of "foot" force that is required to slow a Haflinger down from it's high road speed!

Apparently these inertial brake regulator systems were also used on the original minis and mini-mokes as well. I even found one reference to them being use on the european Ford Sierra (sold as the "Merkur XR4Ti" here in the US) and also they were used on some large "lorries" such as Isuzu flatbed trucks, etc.
Haf-e

It's just installed in the brake line to the rear. It can be installed in the back just prior to the splitter to each rear wheel. Ideally the mounting would allow adjustment of the angle to adjust the response.
Haf-e

They are fitted to a lot of vehicles. They are an easy way to provide some extra control to braking when there is a difference between laden and unladen weights.

ABS systems include their own variations of the brake reduction system in order to reduce the braking force to the rear wheels when unladen and increasing it as the load increases.

Apparently there are different versions of this inertia valve device - the ones on the classic mini's just completely cut off the braking to the rear wheels while the VW ones switch from full flow to the fluid going through a pressure regulator device set to 60-70% of normal.

The older VW one (211.612.501) has the pressure regulator piston/spring in a separate bore from the ball and seat while the newer Vanagon version (made by Girling #251.612.501) has a more combined arrangement where the ball presses directly on the pressure regulator piston/spring in the same bore. Apparently the newer vanagon one has a tendency to fail. The old VW one is suppose to be more reliable. Both are listed as "NLA" (no longer available) from VW. Used and/or aftermarket seems to be the only option.

These seem to be intended for vehicles where they have disc front brakes and drum rear - but I don't see why using them with drum/drum would be an issue. Any thoughts about that?

Still hoping to fit one on my haffy - probably the early bus version. Not too excited about having the rear end swap places during a panic stop - especially when winter driving on snow/ice.

Wonder if this might also be applicable for use on a Pinzgauer too?
Haf-e

I would say it 'could be' more applicable to the Pinz, esp the 710, than the Hafi.
Only reason I say that is the Hafi is pretty slow, light and a very short WB.
It also is a vehicle that has 1 folded sheet of 16g steel between you and the road/other vehicles so
I tend to drive it with that in mind ie extremely defensive driving.
72 Pathfinder | 75 710M 2.7i | 96 350GDT Worker
Top

Well I got two of the 70's VW rear brake control valves - both are the early version with the bleeder on the top. One looked great on the outside (clean / little rust) while the other was much older looking. I took them both apart and the nice one was bad inside (rusty and the seals swollen/deteriorating) while the ugly one was great inside (no rust and all of the seals intact and not swollen).

I put my Haffy's brakes all togther without the valve for now and will initially drive it to see how it feels and behaves - then I will put it in once I make up a bracket. I still like the idea of having it in place.

I will post my experience with it once I have it installed.
Haf-e

Return to “Haflinger engine and driveline”