New to the board, air suspension modified M710

All things not relating to the other forums.
Post Reply
60 posts

New to the board, air suspension modified M710

Hi everyone...
I just joined the board and thought I would introduce myself and a project I've been working on, a M710 Air suspension conversion.

Stock Pinz in the background, and Air Suspension pinz in forground (with right side air'd down): 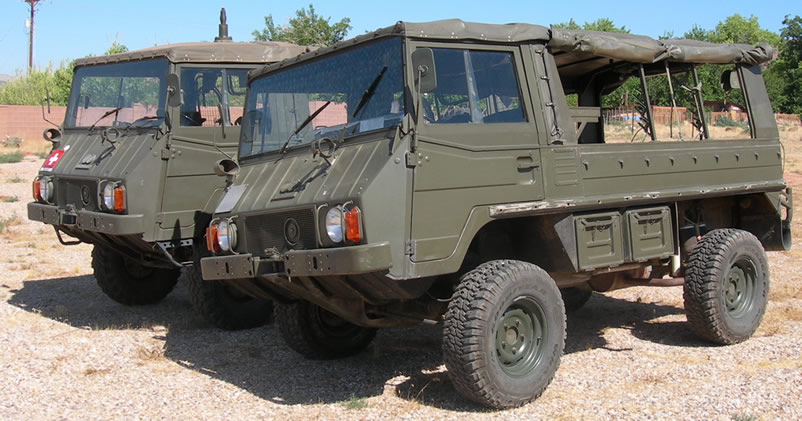 Front air suspension up and the rear air'd down: 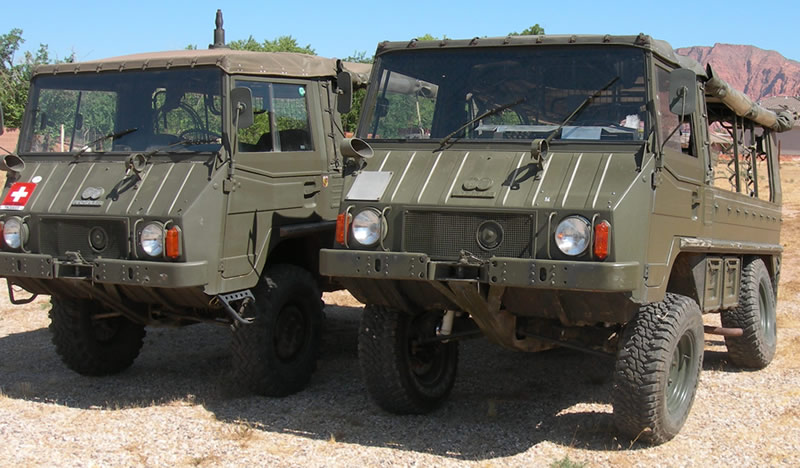 See ya on the trails
Top

Nice work, was that real difficult and expensive or not so much... and how does it handle on/off road as compared to a stock and worth the cost?
Pinzing is AWESOME.
Top

looks like a good idea. the system doesn't extend parts beyond their safe range of motion?

do you have any design data to share? drawings? pix?
1973 710m
"it is not in the best interest of the shepherd to breed smarter sheep." ~ author unknown

Welcome. Pretty unique concept. Got any pics of the air suspension off road?

I saw this set up first hand at our treffen,very nice! Uneven tire wear would be eliminated by adjusting suspension pressure. Following this truck on the trail I could see the changes in attitude of the truck when approaching obsiticles,cool! Well this is not my horn to blow,so carry on Air-Man!

Well air suspension certainly works on the Range Rover so I can only assume it would have benefits on the Pinny!
I, like a lot of others on the forum would love to see the Pinny in action so to speak .... Bring on the pics and videos!

We have been working on this air suspension system for a while, with the rear system being designed first, which currently has around 4000 miles on it, and the front system which has a little over 1000 miles on it.

We have found that the ride is much improved, with less road noise and vibration, and as Mark mentioned, the abitlity to lower the suspension so that the tires wear evenly. We have added a CO2 bottle, and a set of switches/pressure gauges on the dash, so that we can monitor and manipulate the air pressure on each of the 4 independently and on the fly. The ability to change the pressure according to the terrain has made the truck alot of fun to drive. (IE: Driving down steep slopes we can decrease the rear suspension height, as we choose)

This system uses industrial airbags like those found on large semitrucks/tractors. One of the beauties of the stock Pinzgauer suspension system is how easy it is to work on. One of our goals with the air suspension system was to not significantly alter the existing support structure, but to take a "bolt on" approach as much as possible. So we utalize the existing shock and spring mounts. The travel is simular to that of a stock Pinz, we are just able to utalize all of it. The airbags have internal bump stops and the rear uses a slightly modified stock limiting strap. A slighly modified stock limiting strap can be used on the front, but a recent update to the front system uses two shocks in place of the stock limiting strap (using the shocks as the limiting strap).

I'll post some more photos of the system shortly, and figure out how I can get my videos online.

M Wehrman wrote:I saw this set up first hand at our treffen,very nice! Uneven tire wear would be eliminated by adjusting suspension pressure. Following this truck on the trail I could see the changes in attitude of the truck when approaching obsiticles,cool! Well this is not my horn to blow,so carry on Air-Man!

Mark, Thanks for your help at the SWPA Treffen, the truck is running much better once we played with the carb a bit.

pinzair: are you planning on marketing this setup? or is this an art project? i want.
1973 710m
"it is not in the best interest of the shepherd to breed smarter sheep." ~ author unknown

I saw some pictures of this in the photo gallery and have been trying to track you down. Let us know if you'll be producing any kits
Top

what photo gallery?!
1973 710m
"it is not in the best interest of the shepherd to breed smarter sheep." ~ author unknown

sorry guys- should have been more specific. These pictures on the yahoo pinzgauer group's gallery have had me searching for a while. The Idaho 8B plate had me curious too.
http://ph.groups.yahoo.com/group/pinzga ... rowse/90ec
Top

The photogallery on the Yahoo Pinzgauer group shows an earlier revision of the rear air suspension system, we have since updated the mounting bracket on the shock. The gold color metal shown on these systems are chem film (MIL-C-5541) plated simular to that used on many Aerospace products.

We are looking at ways to be able to provide these air suspension kits, both front and rear systems, as well as an optional dash mounted control system. Building these kits individually would be rather expensive, but if there is enough interest to build say 5 or 10 sets at a time, we'd be able to lower the cost. So if your interested in any of these kits, let me know...

If your around the St George UT area and would like to check out the system, send me a PM I'd be happy to meet you.